A rare day out with Bill, we parked near Keld and walked down through the cottages along the lane which brings you to the bridge across the River Swale. This is the meeting place of the Pennine Way and Wainwright's Coast to Coast, but all was quiet today, no one about. Our route followed the Coast to Coast for a while, past the ruins of Crackpot Hall and followed the path high above Swinner Gill. A short detour from the bridge across the gill was taken to visit Swinner Gill Kirk. The waterfall had little water in it none of which was going down the cave.

A cool breeze was blowing down the gill, it was difficult to find a sheltered spot for lunch, eventually a goo place was found with a panoramic view of the upper Swale. The thin thread of a path contoured across the hillside to Arngill. We explored the recently restored adit mouth and old tips of the lead mine, before we descended to the valley floor. Across the footbridge field paths brought us round to the bridleway which gains height quickly up the southeast flank of Kisdon, the short cropped turf made for easy progress over the summit ridge. The track drops off promptly towards Keld and in our case the car.
Posted by Al at 21:40 No comments:

A bit of a change today, as I was on my own I got the mountain bike out, the first time for ages. I parked at Knipe Fold, my route took me over Iron Keld and down to Colwith, the bridleway brought me to Stang End and eventually Tilbirthwaite. The weather was much warmer than forecast, unless it was my body thermometer! I found a shaded spot under the Silver Birches to have lunch, whilst eating my butties I heard a Cuckoo, the first for me this year.
More bridleways and cycle paths led me to the head of Coniston Lake, before the stiff climb through the trees to Monk Coniston Moor. I was then able to pick up "The North Face Trail" which I followed all the way to the Grizedale visitor centre. Old bridleways were ridden to Satterthwaite then over to Low Dale Park and eventually Eel House. The road, which was busy, on the east side of Esthwaite Lake gave me the chance to do Scar House Lane on the way back to the car, which I arrived at completely knacked!
Posted by Al at 20:53 No comments:

The Eden at Temple Sowerby

Another short stroll beside the River Eden, other than the traffic on the A66 (which we passed under) this was haven of peace on a Bank Holiday Sunday. The river and the banks were full of wildlife, an hour or so passed quickly as we watched Martins flying low over the water, catching flies before returning to their nesting holes only a few metres from were we sat. Further on the sandstone cliffs of Oglebird Scar had an appearance from another world. The sun was beating down all the way round, the car was a welcome sight back  in the village of Temple Sowerby.
Posted by Al at 21:11 2 comments:

I've made my annual Easter Trip to southwest Scotland on my motorcycle. This is a part of the world which never fails to both impress me and sooth the inner being, a lovely part of the world. Without boring anyone with a blow by blow account, the highlights were for me the two lighthouses of Carsewell and the Mull of Galloway, although Kirkcudbright is a particular favourite of mine. The photo above is of the quay at Kirkcudbright.   The Mull  is Scotlands most southerly point, and a RSPB reserve, there were many seabirds nesting on the cliffs. The distant views weren't the best, the good weather meant a soft haze clung to the western coasts. The overnight accommodation was the SYHA at Minigaff (Newton Stewart) which was as always excellent. Oh well work tomorrow, gives me time to plan sun/mon's activities.
Posted by Al at 22:26 No comments: 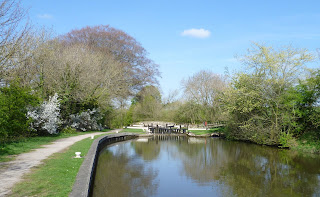 Bank Newton is a small hamlet west of Gargrave on the Leeds Liverpool Canal, we arrived here to fill-in a gap which we hadn't walked on previous visits to the area. An easy ramble westwards along the canal to East Marton and back using a section of the Pennine Way and quiet lanes made for a pleasant day in the warm sun. Lots of barges were using the many locks, and provided good entertainment to the casual observer.
Posted by Al at 21:18 No comments: 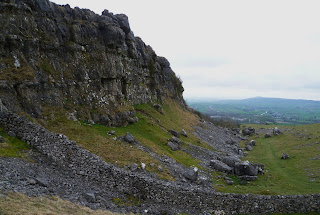 When I got home from the bike ride, with the day improving, and still some energy left, I went for a short walk up Farleton Knott from home. I haven't managed to get up there very often yet this year, partly due to lots of cycling, the reason for which will become clear in the fullness of time. 4 posts in 1day, madness!
Posted by Al at 21:01 No comments:

My Dear Friends and Followers 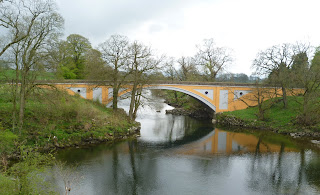 Well part of it anyway, after a damp, drizzly morning I could fester no more. so out with the Cannondale and off I rode following the rather well marked cycleway as it led me towards Silverdale, then through quiet lanes to Arkholme in the Lune valley. Here I had to make a decision south on the Lancashire or north on the Cumbria cycleway, Cumbria won, partly because I knew the Tea wagon would be open at Devils Bridge. Tea taken, my route was up the Lune valley, turning off through the old estate of Rigmaden, and the killer climb which seemed never ending. A fast descent towards Kendal, over the flanks of Helm and shortly I was leaving the A65 down narrow lanes to arrive home. It had just managed to stay dry and in fact had improved as the day wore on.
Posted by Al at 20:51 No comments:

I had an idea to freshen up the appearance of the blog this morning, I think it looks better. However I seem to have lost my list albeit short of followers. Please don't take this personally, it is entirely due to my incompetence with computers. Who knows where you've gone, the header is there, but your pictures aren't! Sorry, I shall try and fix it!
Posted by Al at 09:26 No comments:

Beside the River Eden 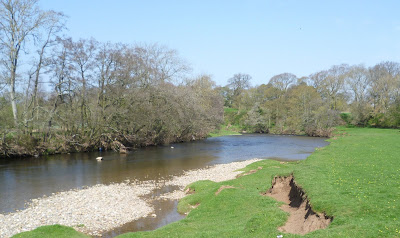 A beautiful day, very warm, and as we strolled beside the River Eden we watched the first swallows of the year. Very peaceful and just the job for such a day.
Posted by Al at 20:37 No comments: 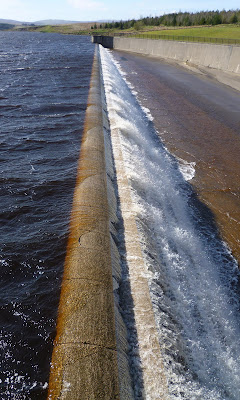 Last minute change of plan, and with the sun shining I decided on get the BMW out. I headed over to Dent, then Garsdale, Hardraw, the "Buttertubs" and down Swaledale. The minor road from Low Row led me to Langthwaite, before I rode over the "Stang" to cross the A66. After a browse round Egglestone Abbey and a spot of lunch I traveled up Teesdale turning off to visit the Hury, Balderdale and Selset reservoirs. A point of interest the old Selset reservoir, which was built for water supply, has had a hydro plant installed which will produce 750 kw of electicity. No new blot on the landscape here! My route home was via Brough, Kirby Stephen, Tebay and Kendal. The sun shone almost all day, all the towns and villages still had grand shows of daffs.
Posted by Al at 20:52 No comments: 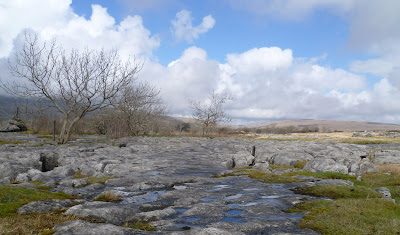 As I parked at Ribblehead the" Three Peaks" were shrouded in dense low cloud, so a route was devised at lower levels. My plan to visit the pastures and limestone pavements below Park Fell, then crossing to the other side of the valley to return to the car under the viaduct.
Gauber pastures were first on my clockwise trip, I was trying to locate the settlements and farmsteads which are only rather sketchy on the ground. I sheltered behind a wall as a sharp shower passed, and ate my lunch. The limestone pavement hereabouts is part of a nature reserve, and deservedly so. Great Douk cave was next on the agenda, not a much water coming out really. I traversed round towards the Hill Inn, down the road a bit and along the private road to Philpin. The path branches off and passes "Hawes Gill Wheel", a huge sink which must be a terrific sight in times of flood. The sun was out now for the last leg back under the viaduct which never fails to impress.
Posted by Al at 20:21 No comments: