Reminded of Brunt Knott the other day after reading http://cumbriafellraven.blogspot.co.uk/ I realised that I hadn't been up here for years. So with half a day spare a short drive saw me parked in Kentmere. Sadly the rain was teeming down, and as can be seen in the photo low cloud. Not much of a path up this little top, not in any lists I don't think, or is it an Wainwright Outlier? Anyway good to be out shame there wasn't a view.
Posted by Al at 20:33 No comments: 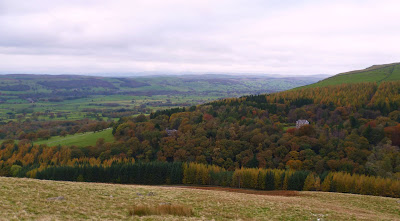 Only a half days walk with my old friend Bill. Having parked in Barbon village we walked through the grounds of Barbon Manor, the drive of which is used as a hillclimb course twice a year. Once for motorcycles and once for cars, all was quiet today, just the breeze rustling in the trees. The woods where a riot of colour, the leaves as good as I've ever seen them. The bridleway emerges from the woodland and shortly after crosses the beck, we climbed the boggy bridleway up to Bullpot Farm, this has been a Red Rose Caving Club hut for many years, passing through the farmyard we had a look at Bullpot of the Witches, a bottomless pothole, (not really I could see the bottom). From Bullpot farm the minor road was the way onwards, until we headed off up onto Casterton Fell on the bridleway. The top is a broad ridge with great views of the Lune valley and Morecambe Bay beyond. We followed thin paths back across the fell, eventually dropping steeply down to the Barbondale road and followed this down into Barbon and the car. The weather wasn't as good as the forecast with several drizzly showers, the temperature dropping as the day went on.
Posted by Al at 20:23 No comments:

Email ThisBlogThis!Share to TwitterShare to FacebookShare to Pinterest
Labels: Daywalk 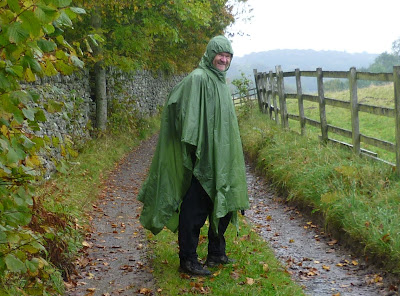 A wet walk along the bridleways of Middlerigg to the East of Brockhole. It did give me the opportunity to use my Golite Poncho Tarp as a waterproof, hardly the height of sartorial elegance as you can see! I should point out that I have a sac on under all that fabric, my back is umpless! It did keep off the heavy rain though and condensation was negligable even though there was little wind. The big question is of course, how do you make it into a shelter when you're wearing it without getting wet?
Posted by Al at 20:48 No comments:

BMW to Tan Hill and Reeth 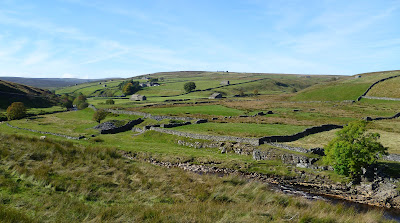 Today was superbly clear, the sun shone all day. I enjoyed the quite roads in Birkdale, Stonesdale, Arkengarthdale, Swaledale and Wensleydale. 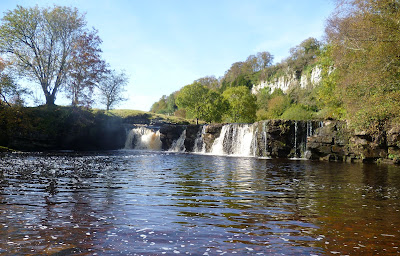 Reeth and Hawes were the only busy places I rode through as I took advantage of one of the best days we've had this year. Shame we've had to wait until October! 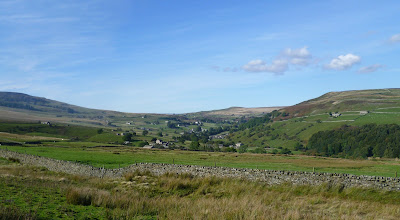 There haven't been many days on the motorbike this year and there won't be many more now. It'll be back to walking or cycling on Thursday.
Posted by Al at 19:44 No comments:

The object of today's walk was to visit the stone circle to the east of Orton. This is within 100m of the Coast to Coast walk, but is seen by few. Hidden behind a limestone wall as trekkers plough on eastwards to Robin Hoods Bay. We took a circuitous route on wet paths and bridleways under Orton Scar, before visiting the Stone Circle. Soon after leaving the circle and heading back towards the car the weather changed and the rain poured down for 15mins or so the contrast in the light was special, it was dry however when back at the car in Orton village 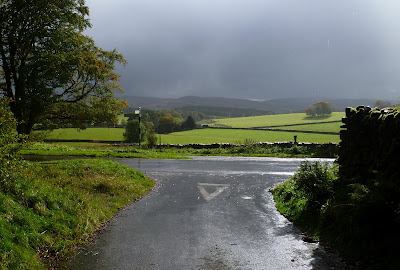