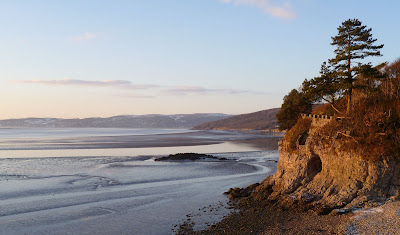 Just a short walk for half a day, from the RSPB reserve at Leighton Moss. There were lots of twitchers with some very impressive camera gear, I believe a rarity had been spotted! We walked through the "Trough" to Trowbarrow quarry and then on to Haweswater, which was well and truly frozen. I'd just finished lunch when I realised that my wallet and mobile were left in full view on my car seat, what an idiot!!
Ian continued, I walked briskly back to the car, all was well but better safe than sorry. I drove round to Eaves Wood and set off again, meeting Ian after about 200m. We were soon at the Pepperpot, the vista out over the bay was superb. Our route led us back via the Cove and the Lots then across field paths to my car, I gave Ian a lift back to his car at the RSPB reserve and we went our separate ways.
Posted by Al at 19:41