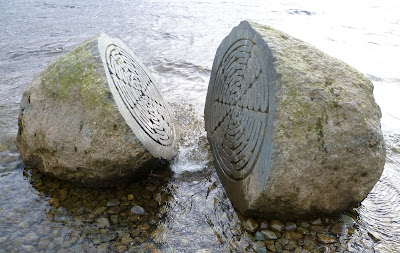 Just a short walk today, determined by finding a parking place! I had forgotten it was half term, the Lakes were heaving with people. We parked the car under Falcon Crag and walked back into Keswick beside the shore of Derwentwater, the sun shone for a brief moment, but generally it was overcast. the wind was incredibly cold. The closer we got to Keswick the busier the path became, clearly a very popular walk.
You can't go to Keswick without a good gear browse, the only thing which really took my eye was a smock, made from Epic fabric. This material was tried by Golite a few years ago. The manufacturer was "EDZ". This company is local to the Lake District, the factory is on the Cumbrian coast at Maryport, good to hear of outdoor gear actually being made in the UK rather than just designed here and produced in the far east. I shall give a bit of thought before I purchase.
A hot chocolate in Booths with splendid people watching, before we returned much the same way, the path much quieter in the last light of the day.
The photo is of the split rock in the lake under Walla Crag, perhaps all Lake District rocks are like this inside.............no I don't think so either!!
Posted by Al at 20:38