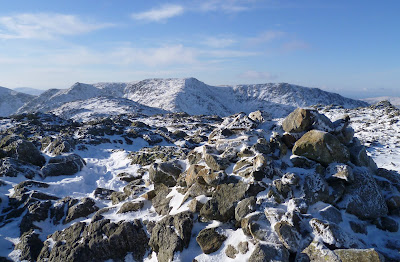 I was surprised to find that I hadn't been up Wetherlam this year, my favourite mountain. A late change of day off meant I was on my own for the day, so I found myself at the snowy car park at Tilbirthwaite, with a stiff NE wind for company.
I took the path up the north side of the ghyll and into Dry Cove Bottom and followed the track until eventually I arrived on Wetherlam's east ridge. The views to the north and northeast were excellent, then steepening ridge looked very inviting, before long I had to put crampons on, as the ice was hidden below the powder snow. The summit was a windy old spot today so after a few pictures I was on my way, my descent route was down the broad Ladstones ridge. An easy traverse of the frozen path across to Tilbirthwaite Ghyll led me down the south side of the ghyll and back to the car. Three and a half hours of mountain magic.
Posted by Al at 20:13