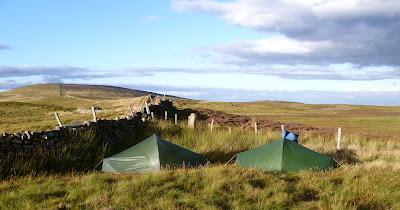 This had been a walk which I'd first thought of about 3 years ago. So Ian and I left Middleham on a sunny Bank Holiday morning, we crossed over to Coverdale which we followed on field paths up to Horse House. A steep ascent led us onto the very dry moor. We struggled to find first water and secondly a sheltered pitch. However we found both eventually. A cool night followed and after breakfast we descended to Bishopdale, and then West Burton. Field paths and the main road crossed we reached the banks of the River Ure, which we would follow on and off nearly all the way back to Middleham. Highlights were the sighting of a Kingfisher and the series of small falls. After a cup of tea in Wensley we were soon back in the Square in Middleham.
Posted by Al at 20:29

Email ThisBlogThis!Share to TwitterShare to FacebookShare to Pinterest
Labels: Backpack