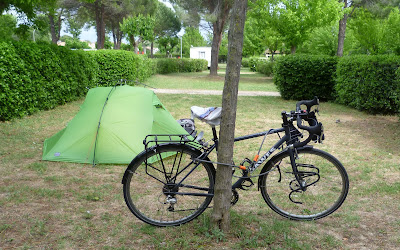 Its been a while since I posted on the clothing I used on my cycle tour earlier in the year, I've been a bit busy since. I almost think it barely worth posting on the "gear" now, but perhaps there might be a few pointers in the scribblings that follow. Some of the gear below is probably no longer available, but it still does the job for me.
Robens Mythos Duo, I bought this tent for this trip. It was excellent cavernous for one, spacious for two, very quick to pitch and stable in the high winds I experienced on the coast. The overall concept of the Mythos Duo is similar to the Phreeranger of old, a tent I had many years ago. I always pitched on a piece of polycro, (not much grass on some of them French sites) The only thing I changed was to leave some of the alloy Y pegs and replace them ironically with some old Pheonix skewers!
Mountain Hardwear Phantom 45 sleeping bag, a great bag 800 fill power down, plenty warm enough, this bag has a half zip, making it very adaptable. I used a silk liner, and slept on a Thermarest Neoair short. My Neoair started to delaminate while I was away, at a guess I had used it for around 25 nights. The comfort and packability is great but the durability is disappointing. I only weigh 65kg and it has always been treated very carefully. It will be going back when I get round to it!
My cook kit consisted of an old non-stick Tefal pan from a cookset, it only weighs 134g and is excellent for "proper" cooking. I also had my MSR Titan kettle and mug, these are now 12 years old and are simply great kit. Eating irons were a Light-my-Fire spork and a polycarbonate spoon (didn't really need the spoon!) Stove wise I again relied on some old tried and tested gear, my Primus Micron, I took with me 2 x 250g gas cannisters for the fortnight, I had lots of gas to spare. Its a shame screwtop cannisters are so hard to find in France.
I carried a cheapy Mountain Warehouse travel towel which was fantastic and from memory £7.99! Wash kit was just the usual toothbrush, sample size paste and soap (which was used for washing me and clothes!) Of course I was passing through lots of towns and villages so this could be replaced as used.
At the last minute I threw in a Thermarest Prolite sitmat, this was used lots ouside the tent and under my feet at night. Very handy, but I wouldn't carry it backpacking!
I'll just list the rest of the "stuff", it was all great and used/tested in the past. In no particular order:- Classic Swiss Army Knife, micro tin opener, Sony Network Walkman, micro Silva compass, clothes line and pegs, First Aid Kit, Lipsalve, Wetwipes and Sun-block sachets. 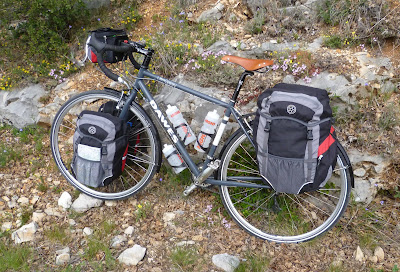 Then of course there was the Beast of Burden to consider:-
The Dawes Ultra Galaxy which I built over the winter of 2011/12 and christened "Eigenbau" was faultless though I say it myself. I only had to adjust the brakes once and oil the chain 3 times, it gave a wonderfully compliant ride and was an awesome descender. I had got the gearing spot on, only a bigger "engine" would have made it better on the climbs!
Tools consisted of a multitool including a chain splitter, a pair of small Molegrips, 2 x spare tubes, Puncture kit, spare gear and brake cable, some spare chain links and a small bottle of oil. I carried a Revolution micro floorpump, and for security a Kryptonite cable and padlock.
All this gear and clothing, and it sure seems alot when I write it down!, was carried in 2 x Front and 2 x rear panniers plus a barbag. These were all from the Edinburgh Bike Coop, Revolution range, all excellent with the exception of the rain covers which were poor. The covers are nice and bright though!
So that's the lot as I said at the top of the post perhaps there's something in there to help someone on a future trip. I'm now planning another project about which I shall post in the near future.
Posted by Al at 21:39