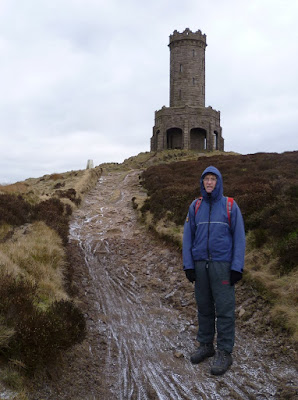 With Ian, The West Pennine Moors, this is a new area for me as regards walking. We parked just off the Belmont Road and followed the Witton Weavers Way up on to Belmont Moor. Although it was overcast the views were extensive in all directions. We turned north on some of the well marked paths in the general direction of Darwen Tower (which at this point isn't visible!). Eventually the tower appeared in front of us with the trig point below it, the wind had brought the temperature right down, it was freezing.
A dark spiral staircase led to the top of the tower, the moors stretched out to the south, and below us beyond the reservoir lay Darwen and Blackburn. A bit of backtracking and a quick descent led us down to the visitor centre and cafe at Tockholes, we had a snack and then made our way back to the car via Plantations no2, 3, and the ruins of Hollinshead Hall. This was a great walk and theres lots of scope for more trips.
Posted by Al at 20:17