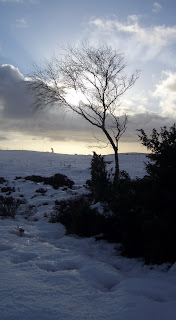 From the old A590 we walked along the footpath which traverses the south end of the scar. The old path Zig-zags up through the wood, eventually arriving at a relatively new cowshed, extremely well built in the style of a log chalet.
No cows to be seen although they could be heard! After a spot of lunch we continued on to the edge overlooking Witherslack with the views opening up to the Winster valley, and to the south, Morecambe Bay. The path was followed south along the ridge through the snow, finding the cows en-route, they seemed unperturbed by the snow.
A light shower passed by on the descent to the car, the snow had been very soft and slushy meaning my feet were very wet, I should probably throw the old Brashers, but I probably won't! Photo is of one of the many Silver Birch on the ridge.
Posted by Al at 20:03