Cycle Tour in the Western Dales


Today was another step in the training for my cycle touring holiday in the South of France, which is fast approaching! My route from home was over the flank of  Hutton Roof to Kirkby Lonsdale, down to Devils Bridge for a mug of tea. Minor roads led me above the Lune Valley and into Barbondale, which I followed over the col and down into Millthrop and then Dent. Dent had lots of work going on, getting ready for the Easter rush no doubt. I cycled up Dentdale passing through Cowgill and then tackling the steep hill to Newby Head, this gave access to the B6255. Downhill for a good long way to Hawes, busy as always, I decided not to stop. The road on the north side of Wensleydale provided a nice spot to sit in the sun and eat half of my food. Onwards through Hardraw and back across the watershed to the Moorcock, and down the Mallerstang valley to Pendragon Castle where I ate the rest of my food. A sharp climb over the flank of Wild Boar Fell and I was on the return leg, much of it downhill to Sedbergh. The Lune Valley was the route for several miles before crossing to Rigmaden and more minor lanes to Old Town and Lupton. A mercifully short distance on the A65 and just an odd mile in the lanes and I was back home. 77 miles and 1348m of ascent. The weather was perfect, except for a headwind on the leg from Hardraw to the Moorcock Inn.

Cycle on the coast

Another wonderful evening, how lucky I am to live within 10 miles of the Lakes, Dales, Bowland and only 5 miles from the coast. Got to make the most of this weather, this could be our summer!


A re-visit one week later to the eponymous "Highway". Last sunday I was cycling along it, but today we walked along it. The original line has been followed by the Pennine Bridleway, although as I mentioned last week re-surfaced for much of the ascent from near Outhgill. Lunch was taken at the sculpture "The Water Cut," I'll not bore anyone with a photograph again. We crossed the infant River Eden at Hell Gill, before descending to look at Hell Gill Force. This would be very impressive in spate but sadly today the beck was low. There's no pleasing some folk! our route back to the car was partly field paths and part on the road. The weather was superb again, remarkable really for late March.
Posted by Al at 20:50 No comments:


My motorcycle was in for its MOT today so the day was sadly rather compromised. However we made the best of the amazing weather. A stroll round Brotherswater and Hartsop, observing the fresh shoots of spring. a great time of year. The reflections were very impressive, although as the day went on a breeze did spring up and they were gone.
Posted by Al at 21:30 No comments: 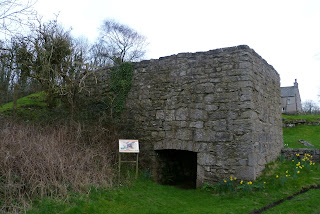 This evenings cycle ride took me across the mosses to Hale and then to Silverdale. I rode along "Bottoms Lane"(apologies to Mr Shakespeare!) stopping to look at the restored Lime Kiln below Bottoms Farm. I continued out to Jenny Browns Point and sat admiring the view for a while. I retraced my outward route for much of the way, making a detour via Slackhead for a change, and seeing a Roe Deer family on the edge of one of the fields. Virtually flat calm, great for cycling.
Posted by Al at 20:51 No comments:

Having met at "The Duo" cafe in Sedbergh, the seven of us set off on the A685 towards Kirkby Stephen. The scene to the west was the impressive Howgills. Once past "The Street" we turned east and followed the Pennine Bridleway, which makes a well graded passage to the ridge of Wild Boar Fell at "High Dolphinsty". We sat beside the wall and ate lunch in the warm sun. Lunch eaten we descended into the Mallerstang valley, turning north for a short way the next track headed south. This was the re-surfaced "Highway" much used by Lady Anne Clifford as she travelled between her castles in the Dales and Cumbria. the climb is all rideable, these days.  The sculpture, which is prominent on the skyline for the ascent is weathering well, we regrouped at this point before continuing along the excellent turf to Hellgill. The "Highway" carries on following the edge of the escarpment, crossing several streams before we dropped down to the "Moorcock Inn" along a newly created part of the Pennine Bridleway. Coffee was taken at the Inn, no cake on offer mind, so chocolate bars were the meagre rations. Another short section of Pennine Bridleway to Garsdale Station, where Don had left his car, so after saying our goodbyes we pedalled down Garsdale back to Sedbergh, the low sun showing the Howgills and Baugh Fell to great advantage. Today has felt like spring is finally here, lots of buds starting to appear in the hedgerows at last.
Posted by Al at 21:31 No comments:

Another start from the Refreshment Rooms at Carnforth today, and the first of 3! cake/coffee stops. We rode through Warton to take the bridleways which shadow the A6, before crossing over to follow minor roads to Holme. I was back within 30metres of home. the ride continued down Old lane passing through the hamlet of Farleton and across to the cafe of Farleton View. It was very busy, but the cakes were exceedingly good! The long but gradual climb which followed took us through Gatebeck, Holmscales, Middleshaw, and eventually to Old Hutton. Here we detoured to look at the church and its very unusual gateposts. Across the Kendal/Sedbergh road towards Docker, before turning to climb first on tarmac then up the steep bridleway onto Lambrigg Fell part way along the track we stopped to eat our butties, not the most sheltered spot but a good view back all the way to Morecambe Bay, the sun glinting on the sea. This was the furthest point of the trip, our return leg was along the "Old Scotch Road," more or less downhill all the way to Kirkby Lonsdale and another cake stop in "The Cariad" tearoom, Butterscotch Tart, devine! It only remained to make our way back to the start, down the Lune valley then over by Docker (another one), to Borwick. Here we split up Simeon and Don heading for Carnforth and I riding home. A great ride in good company with  a cool wind and overcast skies for most of the way.
Posted by Al at 21:47 No comments:


Silver How is always a pleasing little hill, not to demanding but possessed of lots of nooks and crannies. I climbed it today from Chapel Stile, using the path beside Walthwaite Gill to reach the ridge before crossing over to the summit via lots of humps and bumps. I lunched beside the cairn with Grasmere and Rydal Water forming the foreground to the view. Behind were the Langdale Pikes, which lunch consumed I headed towards. At the group of reedy tarns I traversed downwards, eventually the ground steepens and I reached the valley road at Harry Place Farm. I wanted to have a look at the rock-art on the "Langdale Boulders," only rediscovered in 1999! The road was very quiet today as I ambled back to the car. The weather had behaved its self only raining once I got back.

A day of sunshine and heavy showers, having parked at Shepherds Bridge near the junction of Tilbirthwaite and Yewdale. South on the "multi-use" path was our route, crossing the road and taking the bridleway to pass Low Yewdale farm. This track takes you over to Monk Coniston and its collection of trees from all over the world. A bit confusing as regards access, although we didn't bother to much about that. Some is "HF", some Nat Trust and some "right of way." We ate our butties in the renovated kitchen garden then walked up towards Tarn Howes before branching left to Tarn Howes Cottage and dropping back down into Yewdale and returning to the car. The views between the showers were great the hills showing a covering of snow on the highest tops.

Evening ride round Arnside and Silverdale

An early start at work meant an early finish, on what has felt like the first real day of spring. I got the road bike out and rode from home via the Yealands to climb over the shoulder of Warton Crag, the sun was setting the bay alight as I descended to Leighton Moss. the fields had many Greylag geese grazing as I passed. Continuing on through Silverdale, then following the coast road, eventually climbing over Arnside Knott and dropping down into the village. The sun had by now disappeared  so it was back across the mosses via Hale to home
Posted by Al at 19:54 No comments:

After a ride on the road bike this morning, a short easy stroll was the order of the day for this afternoon. Parking at Arkholme in the Lune Valley we walked downriver following the Lune Valley Ramble. The ground underfoot was soft in horseracing terms! Leaving the riverbank after a mile and a half we followed field paths up past Storrs Hall to cross the main road. We walked down Locka Lane, leaving it to cross more fields full of lambs, this brought us back to Arkholme. This is full of properties dating from the 16c. also home to a lovely little church.
Posted by Al at 20:33 No comments: