Kentmere on the Dahon 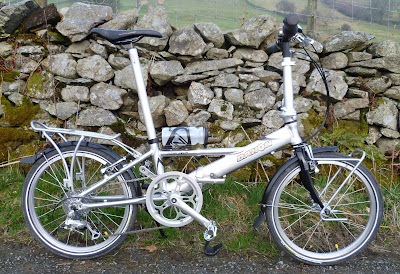 A short ride after work on my new toy! The weather wasn't quite as good as I thought it might of been, but it stayed dry, and its always good to be out in the fresh air after a day in the office. I parked in Staveley and rode up the valley to Hartrigg farm and back. The woods and fields beside the River Kent were home to rafts (is that correct?) of tiny wild daffodils, whilst the rabbits were taking advantage of the evening sun.
The Dahon Helios is a great ride, I bought it over the internet from CH White in Wiltshire, and I would strongly recommend them to anyone looking for a great choice of folding bikes. They are able to alter the spec on there custom built models to suit, the route I took to achieve what I required.
Posted by Al at 20:42 2 comments: 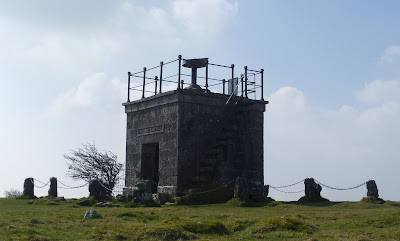 A short day due to other commitments, so a short drive to the north end of Hampsfell. We strolled along the "restricted byway" back towards the summit, and view indicator. The path/bridleway twisted through woods, quiet paddocks and the open areas of limestone pavement. Sadly the view was not the best, a bit to hazy for the distant vista. We took lunch just below the top looking over Cartmel, before we headed back north on a roundabout route to the car.
Posted by Al at 20:12 No comments: 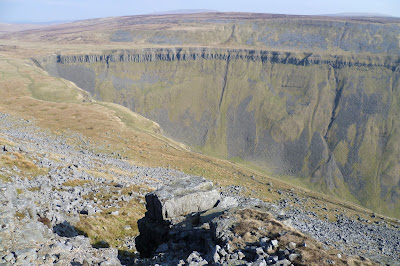 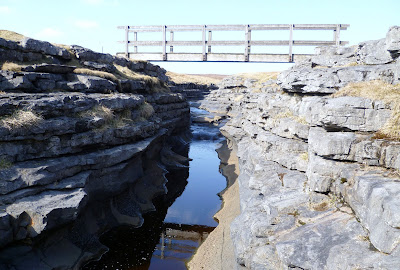 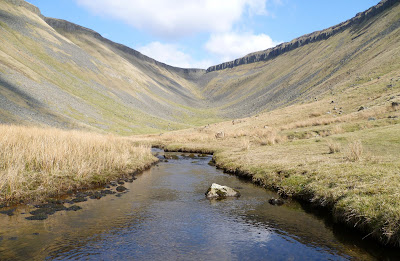 Well what superb weather, we couldn't believe it was still March. Ian and I parked in Dufton under the Pennines and set off southeast along the minor roads past Keisley to pick up the path which would give us access to High Cup Gill. High Cup is unlike anywhere else in England as far as I know, nature at its grandest. The path marked on the map isn't the most obvious as you descend to the floor of the valley, but eventually it improves. We were checking potential camping spots as we followed the stream until it disappeared under the boulders. After a lunch stop the terrain steepened, quite soon we emerged onto the flat area which is crossed by the Pennine Way, its high point on this crossing of the Pennines.
Maize Beck was our next objective, the flat terrain made for easy walking, once beside the beck we followed it upstream until we reached the footbridge which crosses the beck at the mini limestone gorge. This was our turning point, we wanted to contour round Backstone Edge to drop back to Dufton via Threkeld Side, the path which we knew existed proved a little elusive at first. We found it eventually, after a bit of pathless heather bashing. The thin path round Backstone Edge visits several cairns and "stone men", before it reaches the despoiled Threlkeld Side, a good track led us all the way back to Dufton, passing Dufton Pike on the way. A quiet area this especially mid-week, only 1 person seen once on the hill.
Posted by Al at 20:57 No comments: 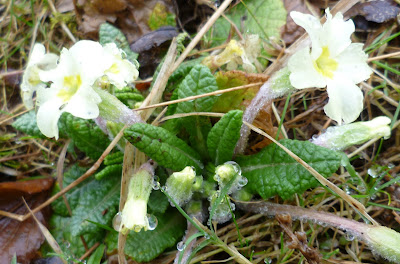 This isn't the Latterbarrow overlooking the head of Windermere, but the little known Latterbarrow near Witherslack in the South lakes. A rather dismal day, when it never really stopped raining. We parked on the old road at the Derby Arms, and followed paths and bridleways through deciduous woodland and secluded clearings to Halecat and back by a parallel but different route. Quite a few wild daffodils starting to appear, and just one Primrose braving the cold and wet.
Posted by Al at 19:59 No comments: 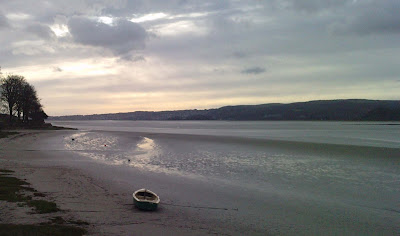 A busy old day, up early to do the domestic chores, then a mega clean of the motorbike. After a spot of lunch, up to Staveley to get the motorbike MOT'd, then a spot of shopping, before tucking the bike up in its garage. It was still only 4pm so get changed and get out on the old Ribble pushbike to ride across the mosses, and through the lanes to Arnside and back via Dallam Park to arrive home before dusk arrived.
All the pending jobs done in one day so lots of free days ahead for more interesting pursuits.
Posted by Al at 20:17 No comments: 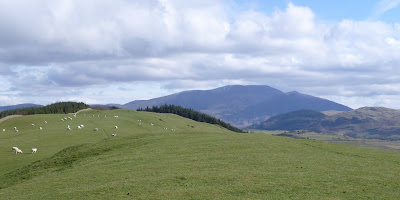 An easier day and an easier Marilyn, Watch Hill is near Cockermouth, and from the lack of footpaths or indeed anything to mark the summit, it is little visited. A bridleway took us up to the ridge, and an excellent view over Cockermouth. The wind was terrific, fortunately mainly on our back, as we progressed along the broad grassy ridge, visiting several little bumps to make sure we'd done it! We dropped down through the woodland to reach a forest road, which after a spot of lunch in the sun, we followed back to the car.
Posted by Al at 19:31 4 comments: 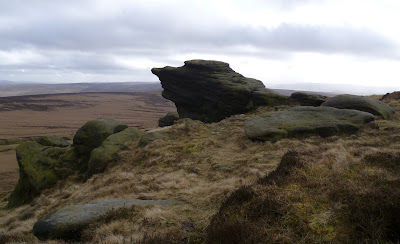 A rare day out with my mate Bill, I managed to convince (con?) him that Boulsworth Hill would be a suitable target for the day. This is another "Marilyn" of course. This is getting a bit addictive!
We parked just outside the hamlet of Wycoller and walked down and past the ruins of Wycoller Hall, our route led us southwest across a land of stiles, gates and myriad paths. Eventually we arrived on the open fell and cowered behind a wall for lunch. Lunch eaten we followed the good path up onto the ridge and along to the trig. The wind was battering us so we didn't linger except to investigate a rock that should have "witch" in its name. Our route back took us down to the Pennine Bridleway and back to Wycoller via Smithy Clough. we got back to the car just as a heavy hail shower arrived.
Posted by Al at 20:14 No comments: 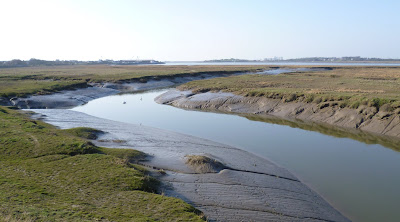 An absolutely beautiful day the sky hasn't had a cloud in it all day. After my efforts recently at bagging Marilyns I felt like a change today. I set off with a very loose plan to head south! how loose is that! My eventual route took me on minor lanes close to the Lancaster Canal, before climbing up and over to the Lune valley via Over Kellet. After crossing the Lune I rode through to Quernmore and onto Bay Horse, Cockerham and decided that Winmarleigh should be my turning point. Lanes to the west brought me to Stake Pool and Pilling, the terrain in these parts is flat as a pancake. This sounds great for cycling, but what it really means is you get no downhills for a rest.
All homeward bound from this point, the Bowland hills in front of me as the road follows the coast, Glasson is always worth a visit with boats of all shapes and sizes. The Lune Cycleway, built on the old railway was busy with both walkers, dogs and cyclists, soon I was crossing the River Lune on the Millennium Bridge. A bit of housing estate and the canal towpath gave me a traffic free route past the built up bits. This just left a few miles of quiet lanes to reach home, almost 60 miles most of them "easy".
Posted by Al at 19:24 No comments: 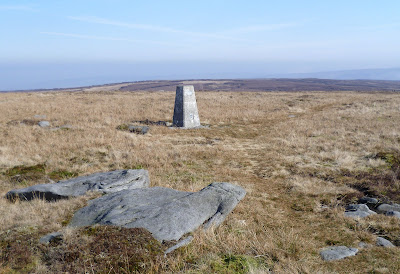 Another day out with "Marilyn"! Ward Stone was the closest unclimbed Marilyn until today, my last effort at an ascent was over 20 years ago, when I was beaten back by the weather. I can't quite understand why its taken so long to go back. Anyway I parked near Tarnbrook and walked through the farm buildings to a gate which had many "no" signs fastened to it, the excellent track, maintained no doubt for the shooters made for an easy ascent onto the plateau. There is in theory a rock or cairn called the "cat and kittens" although nothing i could find answered the description.
The trig was in view from here, this according to the map is the lower of the 2 trig points, from my memory not many hills have 2 trigs. I turned to the east and crossed the flat terrain to the second column, higher by 1 metre in theory, it looked and felt lower than the other. To make the walk into a circuit I followed the ridge round for about 2 miles until the old permissive path was reached, which I followed all the way back to Tarnbrook. The weather had been great, the sun warm and the wind light. Unfortunately the haze had reduced the views to only about 5 miles.
Posted by Al at 20:12 No comments: